Shar Pei or Chinese Shar Pei are very recognisable dogs for their wrinkly skin and their black tongues, they are an amazing breed of dog. I am lucky to have one myself who I rescued around 4 years ago, but for anyone who is asking what is a Shar Pei? Or would like to know more please read on.

Shar Peis originate from southern China and are known for having very wrinkled skin and black tongues, the name ‘Shar-Pei’ translates to say ‘sandy skin’ which refers to the breeds short rough coat which is reminiscent of sandpaper. As Puppies, they have very wrinkled skin then as they get older and bigger they grow into their skin, most Shar Pei tend to lose a lot of the wrinkles over their bodies when they reach adulthood.

The Shar Pei is known as a basal breed, which means it predates the growth of modern breeds of the 19th century, although it wasn’t recognised by the American kennel club until 1992. 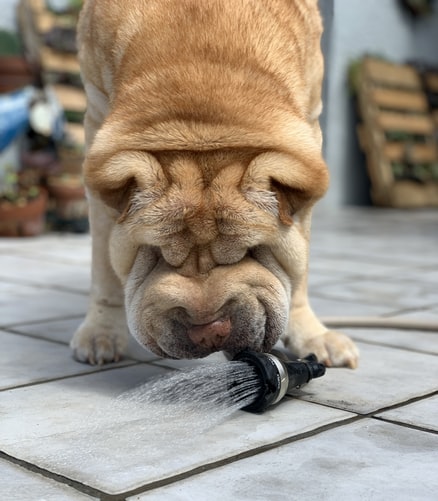 Shar Peis have a very unique look, they have tiny triangle ears and puppies have more wrinkles than adult dogs of this breed, although some adults can still be very wrinkled. I had a Shar Pei who was quite small and she was really wrinkled, but most adults seem to retain the majority of their wrinkles just on their faces across the top of the back and base of their tails, their tails are curly and they have a small compact body. They also have a black tongue, the only other breed to share this similarity is the Chow Chow which the Shar Pei is said to be cross-breed from.

There are many different coat colours, if showing a Shar Pei the coat must be one solid colour, so the flowered Shar Pei which is white with patches of another colour would be disqualified from a show, coat colours include red, fawn, black, brown and blue.

Their noses are generally black or a pink/ brown in colour, and their faces can be the same colour as their main coat or they may have a black mask.

A Shar Pei can come in one of three different coat types, the horse coat, the brush coat or the bear coat.

Horse coat: is the roughest of the coats, it is very prickly to the touch, my boy has this type of coat and when he lies by me it feels prickly and can be itchy to the skin, some people have been known to get a sensitivity to this type of coat and may develop a mild rash when they have been in contact with it. When brushed one way it feels softer but brushed the other way is harsher and stands up.

Brush coat: is a much smoother coat than the horse coat, seems slightly longer and is softer to the touch too, my first Shar Pei girl had a brush coat, brush coats are thought to be more laid back in personality than horse coats, and to be fair that would be the case with my two Shar Peis, my brush coat girl was very laid back whereas my horse coat boy is always more alert.

Bear coat: is longer and fluffy and softer than the other two types of coat. This type of coat is not recognised by the kennel club therefore if you owned a bear coat you would not be able to show it, it is thought the bear coat derives from a recessive gene that goes back to when it was thought to have been cross-breed with the Chow Chow which is known for its big fluffy coat.

Shar Peis are known to be wary of strangers, so puppies should always be properly socialised from a young age with people including children and other animals, they were bred originally as guard dogs so can often be suspicious of people they do not know especially when entering their homes, they are however very loyal and affectionate to their families, so if introduced to visitors properly from a young age there shouldn’t be any issues. But a poorly trained or unsocialised Shar Pei can become very territorial and this can cause issues. Even if you have a well-trained Shar Pei, they will still show some of their guarding signs, such as barking at strangers.

Shar Peis can be known to be stubborn, but they can be trained, repetitive training that is reward based works best. My Shar Pei will pretty much do anything for food, and past Shar Peis I have had, have been the same so if you have some of their favourite treats on hand you will find training to be easy and enjoyable. They do not respond well to punishment or cruel treatment. So always make sure you use positive training methods with your Shar Pei. 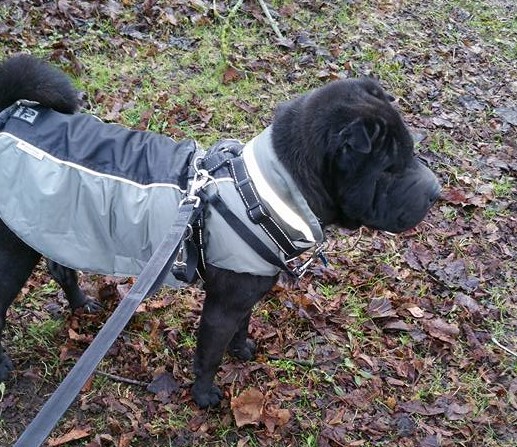 The Shar Pei is an amazing breed but they can unfortunately suffer from many different health issues, if you look back at pictures of traditional Shar Peis they look somewhat different to the modern day version of the breed.

When they were introduced into America the breed became very popular in the 1970’s, and the wrinkled look was what appealed to people, but breeding the dog to create more wrinkles did bring health issues with it.

Shar Peis are prone to developing skin allergies, and skin infections, which can result in sore inflamed skin, this can be reduced by keeping them clean and also being aware of what they eat, as certain foods can cause allergies.

Shar Pei fever is a congenital disease that can cause the dog to suffer from bouts of fevers and swollen ankles which is an accumulation of fluid, this is also known as swollen hock syndrome, this is caused by unprocessed proteins, that get into the organs usually the kidneys or liver, and can eventually lead to kidney failure

They can also suffer from entropion, this is not an issue that is solely suffered by just Shar Pei many other breeds can get it too, but it is a painful eye condition where the eyelashes curl inwards and irritate the eye, if left untreated if can cause scarring to the eye and blindness. This can be fixed with surgery. Puppies usually get their eyelids tacked so that they do not roll inwards.

Because of their tiny ear canals they are also prone to ear infections, this can be caused by a buildup of yeast, and because of their small ear canals can be hard to clean, if you have your Shar Pei from a puppy it is advisable to regularly clean their ears to get them used to it as this will need to be kept up throughout their lives.

These are all things that your Shar Pei could potentially suffer from, I had a Shar Pei that I permanently fostered and she had every illness I mentioned before, but I got her on a good diet and her skin was fine, monitored her fevers, she lived till 11 years old. My boy that I have now is 5 years old and he has never had any of these issues (fingers crossed he stays that way).

The history of the Shar Pei

The Shar Pei is an ancient breed said to originate from 200 BC and comes from Guangdong in the south of china.

They were originally bred for hunting and as guard dogs, and became a popular dog to use for dog fighting as the loose skin made it hard for the dogs opponent to grab onto them and when they did the loose skin enabled the dogs to still be able to turn around and bite back. They eventually lost popularity when larger breed dogs began to arrive from the west.

In the late 1940’s the communist government put high taxes on owning dogs eventually banning breeding altogether, and the Shar Peis numbers dwindled dramatically. A Hong Kong businessman named Matgo Law, rescued some of the breed and appealed through a dog magazine to the people of America to help save them, and around 200 were smuggled into America.

The ancestry of the Shar Pei is not certain apart from the fact that it is thought that it could be cross-bred from a Chow Chow as they share the same black tongue, but DNA analysis concludes that the Shar Pei is one of the most ancient breeds. In 2004 the foundational analysis of purebred dog genetics published an article in science magazine which you can check out HERE that said after wolves their are just four groups of dogs at the base where all other breeds stem from, these being, Asia’s Shar Pei, Akita, Shiba Inu and Chow Chow, Africa’s Basenji, the Arctics Alaskan Malamute along with the Siberian Husky and Samoyed and the Middle eastern Afghan hounds and Salukis. 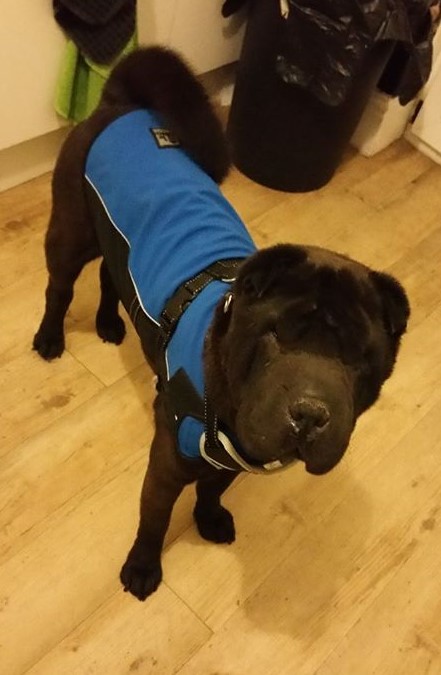 These days the Shar Pei is a companion dog that shares the homes of its families all around the world, as someone who has and still does share their home with Shar Peis they are great dogs. Full of personality they are very loyal, protective and loving to their families, and love to be close to you.

My Shar Peis follow me around the home and love to be lying close to me when they sleep, and although they are fine at home when I leave the house they do not really like to be alone enjoying the company of another dog, and do not like to be shut in a different room to where you are.

Hope you found this interesting, this was my second ‘What is a’ blog it’s a series I intend to do about different breeds if you would like to check out the first one which is all about the ‘Alaskan Malamute’ then please click this link, and feel free to add any suggestions on what other breeds you would like to know more about in the comments.